Africa is famous as the cradle of humanity, with the focus of palaeoanthropological research relating to Australopithecus, Paranthropus or early Homo firmly centred on the rich record of the East African Rift Valley as well as South Africa. Much of the research within the Rift Valley has concentrated so far on the large exposures to the east, with little research or fossil finds west of this geological feature. New research published in PLOSOne has, however, begun to shift this focus and reports on a first hominin find from Central Africa. 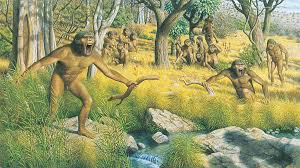 The authors describe and discuss a single molar from the site of Ishango in the Western Rift Valley, which today lays on the boundary between the tropical rainforest of Congo and the savannah woodlands of East Africa. This site, known for its Late Stone Age artefacts, was initially discovered and excavated during the 1950s. Numerous LSA hominin fossils were recovered, and this paper was able to establish that a more primitive hominin has been mixed in with this fossil assemblage.

To assess the possibility of such reworking this research used a new technique of Raman Spectroscopy, a non-destructive method, to compare the diagenetic processes of the hominin tooth and three other fossil teeth from the same horizon. The hominin tooth indicates different spectral intensity combined with a clear carbonate signature (indicating recyrstallisation) suggesting that the tooth was reworked from older, underlying deposits. Based on archival work it could be reconstructed when and where exactly this molar was found and it is suggested to come from a formation dated between 2.6-2.0 million years ago.

Next, macro- and micro-morphological comparative analyses of the Ishango first upper molar with early African hominin groups (Australopiths, Paranthropines, early homo) and later Homo species were conducted. The morphological features of the tooth combined with principal component analyses, confirm its non Homo sapiens nature, and suggest that the overall dimensions and enamel thickness align the specimen with East and southern African early hominins. A more precise species assignment can currently not be made, due to the small comparative early Homo sample and also since this is a time range during which several species were present in Africa.

In sum, these results suggest that early hominins were present within the Western Rift prior to 2 million years ago and suggests that these species had already expanded their geographic range out of the core area of East Africa. Whilst the authors acknowledge the sample size is, at present limited, the study provides an interesting new avenue for future research into hominin ecological adaptation and dispersal during the Pio-Pleistocene.